posted 30/08/2011 category Blog, News
This is Keita from the Recovery Assistant Media Team (RAMT). I visited Kamaishi City in Iwate Prefecture to with 10 fellow members on August 12th. I visited the school to meet the Teacher Miyoko Hirano sensei to listen her story again about what we had interviewed her before. I personaly knew her over the YouTube video I watched her interview, but it was my first time to directory meet her; I became so nervous when I met her. 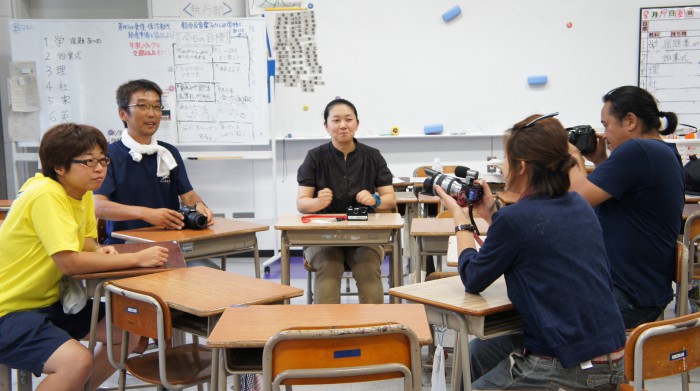 This is the second interview of RAMT to Hirano-sensi; we took the coverage at the classroom of the Kamaishi Junior High School which is different to the Kamaishi “Higashi(East)” Junior High School. The “Higashi (East)” Junior High School building was destroyed by the Tsunami on the 3.11 Disaster. Once the students with Hirano-sensei had a class in the gymnasium which was not destroyed by the Tsunami, but she told us that whole students & teachers had all moved to here, Kamaishi Junior High School, which shared them to use this school-building and classrooms for while. Hirano-sensei talked us the difference of her (as a teacher’s point of view) and her fellows’ situation between the immediate aftermath and now. Even though she had many rough and arduous times by the Tsunami she also talked proudly about her students who have endured this difficult situation. But seriously, though, they have many difficult problems which have been caused by the disaster and never seem to end. I could think of everything in a complex problems. What we can do our best is to help them to solve the problems. That is what we recognized ourselves as the “Recovery Assistant” people.