posted 18/11/2011 category Blog
This is Takefushi from the Recovery Assistant Media Team (RAMT). I visited to Sendai City in Miyagi Prefecture on 14th & 15th of Novermber. I would like to report this topic into two parts. Mr. Nobuaki Takahasi who teaches cooking in Housawa Gakuen Meisei High School lost his house and car by the Tsunami on the March 11th, but his family and himself were all safe by the disaster. 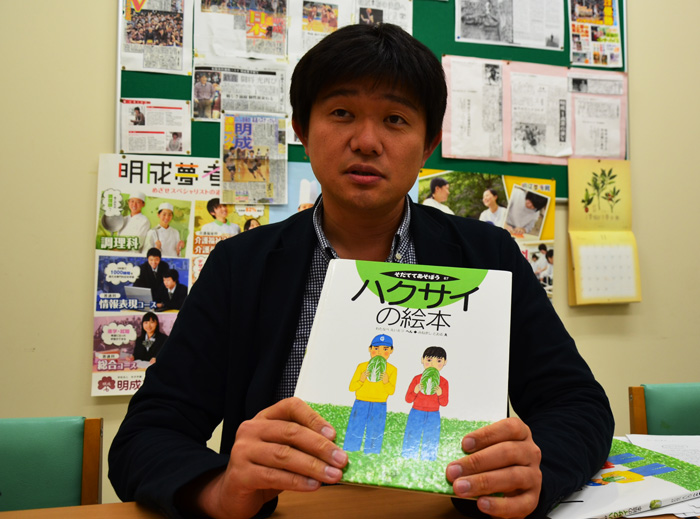 Mr. Takahasi showed me one book called “The Picture Book of Hakusai (Chinese Cabbage)” which has been gifted by his former teacher. He said that he was inspired by this vegetable which perfect to fit the land of Sendai. Hakusai (白菜) has been introduced from China about 100 years ago and it was first treated by Japanese people only as ornamental plants. Cultivation of this foreign vegetable was very difficult at that time. However Matsushima in Miyagi Prefecture succeeded to cultivate the Hakusai to be penetrated and generally used by common households throughout the history, culture, and education of food in Sendai. And this vegetable used to be known as “luxury food” at that time, it had been distributed across the country from Sendai. Housawa Gakuen Meisei High School provides a “Liaison Kitchen Project” in the cooking course. Mr. Takahashi teaches students many different kinds of cooking-workshops which uses local & domestic food. He off course provided students a workshop using this book: “The Picture Book of Hakusai (Chinese Cabbage).” Takahashi studied & researched about this vegetable even he visited to Gwangju City, which is famous for producing the real Chinese-cabbage kimuchi, for international exchange in South Korea. He also visited to Turkey to research for the Chinese cabbage’s roots of cruciferae. He confessed his thoughts to rebuild his Hometown by using this vegetable. “It’s very important that people have been encouraged to eat our Chinese cabbage, which is our local traditional food and cannot be easily damaged by seawater, in Miyagi for reconstruction. However I want to create new style of Japanese dietary culture by introducing this vegetables to as many people as possible in public. This is the important point to help reconstructing our new society to future through food culture.” He added. From the profit of “Liaison Kitchen Project” he purchased about 100 books of “The Picture Book of Hakusai (Chinese Cabbage)” and has gifted to other schools and municipalities as textbook for dietary education. He hopes that people would another have strong bond by this vegetable’s culture & history of Sendai. “Origin x Heart = Originality” This is the idea & principle of his course in Housawa Gakuen Meisei High School. This article will be broadcast by “Message for our Future – For Our Children” (BS12 TwellV 27:00-) on Saturdays, 3rd & 10th of December. - Tomoki Takefushi, Recovery Assistance Media Team (RAMT)